Building Glastonbury Bit by bit - A challenging Work In Progress

Glastonbury - A Waking Dream Of Avalon - Work In Progress

There's some excellent Solstice weather outside the window, and some nice virtual Solstice weather to replicate on the screen. A few free hours proved useful this weekend, to learn the ins-and-outs of plant and tree generation in Unity. A lot of assets and off the peg 3d items come pre-bundled as environments, but I wanted some native flora, especially if specific plants are required for some of the esoteric puzzles.

Cow Parsley is a tricky one, at it has a 3d quality that doesn't work well with billboards (flat plants, in scenes, like grass), and Everyone's Gone to the Rapture has a lovely example in the field scenes. So, it was a good challenge to see what can be done, with little or no experience. There were a few photos to edit, for the textures. I photographed the plants around the Tor a couple of years back, so I used what I had. It's mostly flower head and leaf, that make up the plant, so benefited from a quick 3D surface, to add shape. Mapping the photos onto the models was easy, so it was over to Unity.


After setting the trunk shape, it was a case of distributing the foliage (branch groups). With a bit of tweaking and experimentation, I got the flower heads up top, and a naturalistic look to the leaves. One of the cool things about 3D, and tree creation, is infinite variation.


I really like the fact that the Glastonbury plants are used directly in a virtual world, and animate with the wind, take shadows and dappled light and LOD themselves out of existence when I don't need them.


Photographing flowers, large and small, for use as textures, when creating 3D versions. Getting plants right will prove important, not just in Glastonbury, but during historical and archaeological reconstruction projects later in the year. Basically, representing places in realistic detail, from flora to fauna and climate.


Hedgerows as I remember them, before the industrial trimmer. They bounce and move quite nicely, in various weathers and wind directions, which is perfect for later on. A lot of the weather effects have been made possible by the Enviro system, combined with Unity, to allow loads of customisation. We're looking to recreate the feeling of Summer Solstice, when the day is long and the shadows disappear at mid day.

We filmed a nice little video, on the recent Solstice, in the  valleys between Duloe and Looe. I was buzzing with bugs, birds and life, so felt like a perfect opportunity to capture some of the (slow motion) action. If we can get our hot summer days feeling like the video I'll be more than pleased.

Creating small, low detail houses, was fun. They are for use in the distant background of the scenes, to suggest the wider Glastonbury landscape. There has already been interest as to whether any will feature as haunted houses, but there just detail, for the wider vista. The main location, a closed down museum, is where most of the interior action will take place. A Night at the Museum, as it were. There's a temptation to feature a bit of the famous Music Festival later down the line, as well as a few ruins of the old Abbey.

The opposite of creating the Train Set style houses is creating the interior and exterior walls for Wick Hollow Hall. It's a late 16th Century build, using the local sandstone. Sadly only a few sand stone buildings survive, in Glastonbury, with the pub on the High Street being a fine example, if you ever visit. We captured all sorts of bits while we were there, including windows, doors and archways. The plan was to create a series of modules, with nice natural detail and interesting stone work. There's a lot of iron in the stone around the Tor, which gives some of the stones some variation.

Again, a bit like a train set, we put together the pieces, working out what was required to build the house, from structure to chimneys. It's fun, as in a way, it's got a bit of Glastonbury DNA in the game content, rather than RandOomStoneWall2. If I'm honest, I wouldn't be that  interested in a project if it didn't have some connection to the real world. It makes it more fun to produce.

Quite a few new monuments were added to the main level, with some bits of Grammetry being ushered into use. This old planter well was captured at Luton Hoo, a few years ago. That's my Nanna and Mum in the background, ha ha. Hello Nanna!

I'm really pleased with the results, with lighting and realistic shadows helping to blend the look. Monuments: statues, urns, plaques are everywhere around us, here in Cornwall and beyond, so there's a great opportunity to use some of it! I draw the line at using peoples grave stones, as it's a bit much, but statuary and stonework make excellent game objects. I can't wait to make them puzzles! ;-) 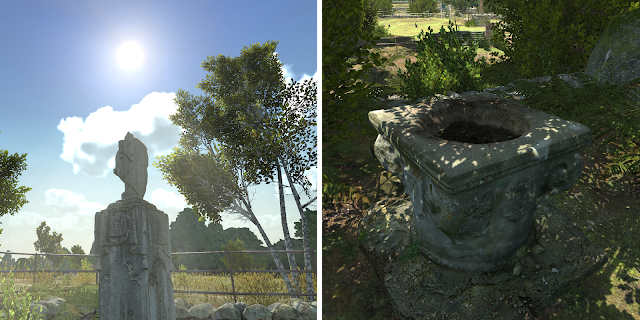 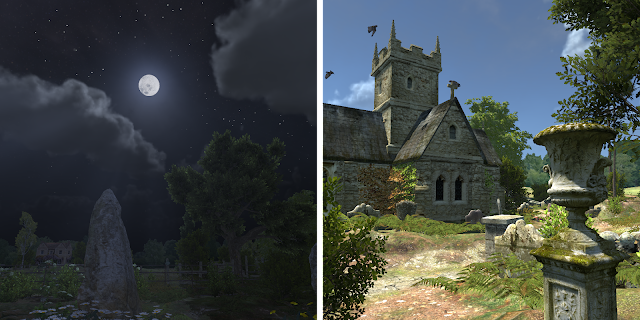 I've been watching quite a few space documentaries this week, in the background. It's a mind expanding subject, and something that's interested me alongside my fascination with stones circles. Most people know that Stone Henge has something to do with the Solstice, as they see it on the news, but most megalithic sites can be attached to some celestial event or solar/lunar activity. It's  ironic that they had to relearn alot of this stuff back in the 'Age of Discovery', and some lost their heads as a result. But, that stuff is reserved for the museum displays, probably with an animating little model to cut off the heads of the blasphemers!! I do like a museum with models. ;-) 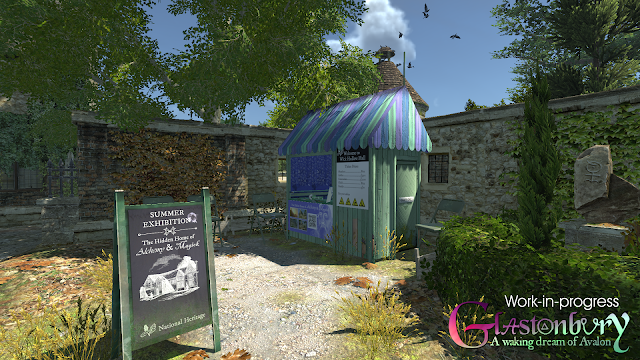 So, with another weekend drawing to close, it's back to the job by Saxton shore. For now, here's  a pic of my Cow Parsley in the sunset by Glastonbury Tor. I'm really pleased with it, so I look forward to seeing waht else can be achieved with a few hours in Unity. 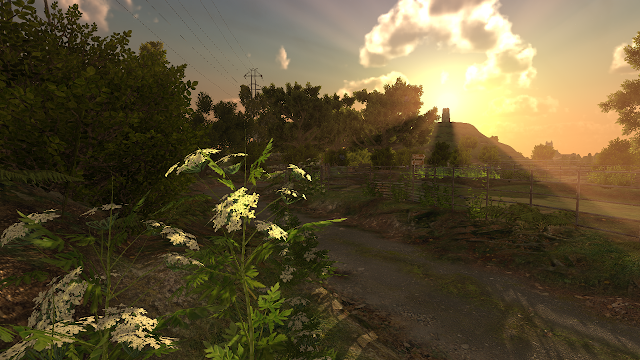