Digging the Bronze Age: An archaeological Easter in Looe.

Along the coast path between Looe and Talland Bay, there is a stretch of land known as 'Hendersick'. Thousands of people walk the rugged cliffs, taking in the dramatic views of St.George's Island, Rame Head and the Looe Bay, unaware they are passing an ancient burial ground, seemingly active from the Bronze Age through to the Roman era. There is little surface evidence to suggest what lies beneath the soil, but aerial photos and local lore have suggested the existence of a 'Barrow' (Bronze Age Burial Mound).

Photo: The Cornish Coast at Hendersick

The mystery could have continued, if not for a chance discovery by archaeologists from the Australian National University (ANU). Catherine Freiman was conducting a survey of the fields around Hendersick Farm, when the Tenant Farmer pointed out the anomaly in the western field. Magnetometry testing revealed that there was a circular ditch, and hits suggesting potential 'cist burials' (stone box, with human remains inside).

As you can see, there was nothing about the field to suggest there was a Bronze Age burial beneath. It's just a field, in an attractive spot, with perfect views of the Island, the dramatic distant headland of Rame Head and the rising sun. Not a bad spot for the afterlife?

Lifting the turf is a ritual on archaeological digs, following months of hypothetical thinking and virtual analysis, it's good to get down in the earth and start looking! It was a gloomy afternoon, as storm clouds rolled in off the sea. A flash of lightning would have been nice, but it's not Barrow Hill!


Photo: Alan sweeps the site for metal objects, both ferrous and non-ferrous.

The turf was lifted, to reveal the soil, in a 10 X 10 Metre square. The excavation is only one quarter of the barrow, a neat section to examine the curve of the ditch and 'anomalies' detected during scans.

It was time for the trowels!

Getting stuck in, it was great to find the first find!

Photo: Fragments of 'Trevisker Ware', from an Urn.

Fragments of a Bronze Age Urn, likely to be 'Trevisker Ware', which was the 'local' pottery 4000 years ago (gotta love a bit of local arts and craft!). We do not know, at present, if the Urn would have contained human remains or offerings. The fragments are roughly an inch in size, and could have easily been missed. Millennia of farming the field has meant much of the soil has been disturbed, so it was no surprise to find such tiny fragments. But, a find is a find! It meant there was hope of finding more.

More evidence of Bronze Age urns, across the dig. It is likely that there were many pots, all smashed to pieces during 4000 years of farming. The field itself, tucked away in a quiet corner of South East Cornwall, is evidence of activity that forms what the archaeologists call 'The Talland Barton Enclosure', a series of field systems and probable settlement (a village).

In all honesty, the farm and fields are probably the quietest they have been since tribes settled in these parts. When not being scrutinised by International archaeologists, it's a quiet spot with a small path that leads down to the very picturesque 'Port Nadler', a favourite local spot for Summer BBQ's and a swim. I wonder if the ancient Cornish folk did much the same, 4000 years ago.

Magnetometry works by detecting variations in the Earth's magnetic field. It sounds very sci-fi, here's the science bit: "Different materials below the ground, disturb the natural magnetic field of the Earth. It is those disturbances which are detectable by the magnetometry sensors" Basically, if soil has been moved, or brought in, the machine will find it.

Weather: AM: Sunny! PM: Even sunnier!

Sections have been cut, across the ditch, by the archaeologists, which revealed the 'ditch' to be much deeper than anticipated. The deeper the ditch, the more it suggests higher status burials. Back then, ditches were serious business! No ditch? No status. At Hendersick the site was also upgraded using 'imported materials', in the form of a reddish clay, likely as a visual or structural component.

Focusing on the centre of the Barrow, much excitement was generated by the discovery of a dark circle, in the soil. Scraping back the soil, signs were appearing to suggest the round shape may be the rim of an urn. Still intact?!

With the sun beginning to set, the curious shape would have to wait.

The Finds Conservator Specialist, Laura Ratcliffe, arrives to excavate and lift the 'discovery' from the ground.

It is immediately confirmed to be a Bronze Age Funerary Urn. Furthermore, it is intact, complete with a 'string pattern' motif, impressed into the clay when it was made! I was told that it is the first unbroken Urn of its type found in the region. Very exciting.

There is every chance that the pot will contain human remains, in the form of bone or ash, as well as 'grave goods'. After finding so many tiny fragments, it is amazing that the Urn (found in the centre of the Barrow) has survived for thousands of years. But, it is very delicate. The Urn is set in plaster, after wrapping, ready for transport to the Lab. The earth around the pot is also collected, as the soil may reveal further dating evidence.

The site undergoes the daily 'Clean Back', where the soil is sieved and examined. During this process, a cut feature was discovered, showing earth work activity. Cutting into the feature, broken fragments of pottery were found, unlike the earlier Bronze Age finds. At present, the sherds are undergoing analysis, with thoughts that it may be Roman. [Now confirmed as Medieval - 14/4/2018]

Exciting or controversial, but evidence of Roman's adopting local practise is found everywhere, from Cornwall to Egypt. There is a also a tantalising chance that any Roman burials may be local people, rather than invaders. Either way, finding evidence of later activity is interesting. A place of the dead, for a very long time, currently inhabited by sheep and the occasional crow.

After portents of terrible weather, including a third encounter with the 'Beast from the East' (I thought the snow looked nice, to be honest), the Easter week turned out nice, if a little changeable.

Photo: An arrangement of slate stones, forming a 'cover'.

Wellies and waterproofs were employed to get through the occasional downpours. All in all, it was a fine week, with finds popping up across the site. 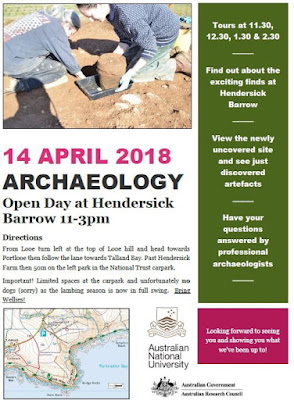